So much for a Routine Check-Up!

Just when I thought I had these weekly check-ups figured out, things get crazy!

For the past three weeks, the doctors have added a 30-minute non stress test (aka NST or fetal heart monitoring session) to my routine sonogram appointment. All has gone well, except for yesterday, when throughout the entire test, they noted that I was consistently contracting!! I didn't feel anything abnormal, just the typical tummy hardening and shape changing, but in discussing what they were seeing and what I've been feeling, I guess they are one in the same.

Because they were so regular, there was talk of medication (to slow down the contractions) or other crazy things, but in the end, I'm to continue without taking any extra measures. It's fairly typical to have contractions at this stage of the game (normally called Braxton Hicks), but I guess for that 30 minute period, they were a little too frequent and consistent to ignore!

NOTE: The following detailed paragraph may be too graphic for the casual Despite Lupus reader...read at your own risk!

To determine that no action was needed at present, the nurse practitioner checked my cervix, and because I'm not dilated at all and the baby's head is still floating (as opposed to pressing down on the cervix, shortening it, or altering it in any way), I'm going to continue on as planned.

When I saw the doctor following the NST and the physical exam, he didn't seem concerned at all. In fact, he chalked it up to irritability. But the nurses were in quite a tizzy over the whole thing, which is just fine, because it definitely got my attention. Bottom line: all is well and Bun is in no danger. I just ha

ve to be a little more cognizant of what I'm feeling and how often.

As the nurses alerted us to what was happening, Johnny and I both had visions of bed rest, admittance, or an early bird delivery. We've told Bun to just hold tight in there...but I guess we need to be a little more specific from now on.

In other news, Bun is doing well - under no stress, looks good on the sonogram, and has a perfectly functioning heart. Although the original hospital admittance date was Friday the 3rd (to deliver the 4th), the doctor decided that since the 4th is a Saturday, we'll be moving the date to Monday. So now I'm scheduled to be admitted on Sunday the 5th, with plans to deliver the 6th. Bun gets to cook a few more days, which I know is good. Guess every day helps those little lungs!

It's also confirmed that I'll be stopping my daily Lovenox injections on the 17th of September...and I won't be starting any Heparin shots as originally planned. Things are going so well that I don't need to take any extra precautions. What a relief! 7 more pinpricks and I'm finished! Yipppee!!

A few days ago you were able to see Bun's accommodations on the inside. Now have a look at Bun's crib from the outside. And although we're not finding out before delivery - I have to ask...based upon the pictures, what do you think I'm having? A girl or a boy? Everyone says you can tell from the location and shape of the belly, but I'm not too sure. I think it's definitely up for grabs! Be sure to cast your vote in the poll at the side of the blog. It's not brain surgery - just take a guess! 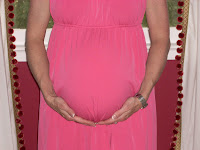 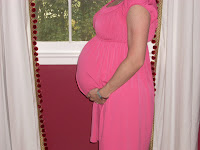 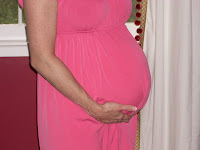 Anonymous said…
I only voted Boy because everyone I know that is pregnant now are having girls . So I figured someone must be having boys why not you.
September 18, 2008 at 2:50 PM