Getting in our ZZZ's while we still can 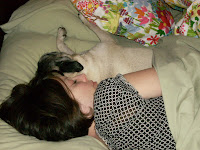 Henry and I aren't wasting one second of the quiet time we have before Bun arrives. While I only slept for my usual hour and a half, Mr. Lazybones was still in this position 4 hours later...when Johnny, Darwin and I were retiring for the evening. Don't worry - we ushered Big Hen outside so that he could refresh and relieve himself before turning in for the night. Life is tough for this guy, huh?

Johnny and I had grand plans of relegating the pugs to the family room at night (because they currently sleep with us)...thinking that Bun's nightly routine would cause the boys to stir, thus keeping us up unnecessarily. We have yet to pull the trigger, and truth is, I don't think we're going to kick them out of our bed anytime soon. While we're strongly opposed to sleeping babies in our bed, furry babies with paws (i.e. puglets) are a different story. Per my example above, Henry doesn't let much come in the way of him and his sleep, and Darwin is a pro at falling asleep the instant his little head hits the bed. Although we did install room-darkening shades so that Henry would no longer be disturbed by the flash of headlights from the lone cars that pass our street in the middle of the night, I believe that he's going to be able to filter out the whimper of little Baby Bun. Time will tell...I'll keep you posted.
Labels: baby pugs