You're probably familiar with the ABC's of sales...Always Be Closing. Well, Baby Bun has a mantra of his/her own...Always Be Kicking. Seriously, Bun has to be one of the more active knuckleheads around these parts. At least that's what MY parts say! 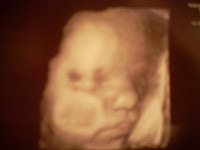 Here is the most recent 3D sonogram picture, where Bun is proudly showing off one very chubby cheek. The baby is weighing in at 6 lbs, 6 oz...give or take a couple of ounces. I have one week and three days left to go - there's no turning back now!

At my most recent appointment, I asked the doctor about neonatal Lupus, in particular about the temporary rash that some babies get who are born to mothers with Lupus. An official description follows:

The neonatal rash can take many forms, but is usually scattered over the body, not necessarily on the face. It shows up a few days or weeks after birth, particularly after sun exposure, and usually disappears after a few more weeks, leaving no scar. The rash looks like many other rashes that babies get. It can be identified definitively only by biopsy, but just doing a blood test and waiting for the rash to disappear is all that is needed.

Thankfully, my doctor says it is very rare, and doesn't believe Bun is currently at risk. We made it through all of the congenital heart block checks (which is another off-shoot of neonatal Lupus) with flying colors, so I'm confident that Bun will be in the clear. But just in case, here are some other reassuring facts about neonatal Lupus:

Anonymous said…
Bun's father was a big kicker, and was my only baby who slept, burped on cue and didn't even try to crawl until nearly 11 months....just sat around and smiled! Hope you are so lucky!!!
September 26, 2008 at 2:28 PM

Sara Gorman said…
Oh, bring on the genes!! I should print out your comment and paste it onto Bun's crib...just so Bun has a constant reminder of the goals of our first year together. :)
September 26, 2008 at 6:23 PM

Apu Mridha said…
wow.. Thanks for sharing such an amazing and informative post. really enjoyed reading it. :)