Stubborn as a Mule 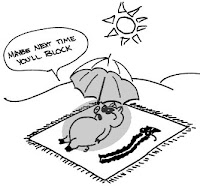 I've come a long way. Not so far that I don't remember my days as a stubborn, determined young lady struggling with Lupus, but far enough that I've learned how to encourage others from making the same mistakes I did years ago. Here's what recently happened:

A newly-diagnosed Lupus friend of mine called to see if I had ever had any sort of skin rash due to the disease, caused by the sun or otherwise. I said yes, of course, and she said she's just developed a rash, but she's not sure it's Lupus-induced. She started on a new medicine recently, and is thinking maybe it's an allergic reaction to that (or something else), but she did just return from a week-long vacation at the beach, where she was in the sun everyday, and even came away with a bad sunburn on her back one afternoon. Just as we all did in the beginning, she's hoping that she doesn't have to add photo sensitivity to her list of ailments, but alas, I think she might have to.

So here was my advice to her - check in immediately with your rheumatologist and let her know what's been going on. She may refer you to a dermatologist, or may be able to prescribe a topical cream herself, but either way, don't waste another moment trying to figure out what brought on that rash. It's not worth waiting, believe me!

One summer, I broke out in a rash on my chest, in the exact spot where most of my v-neck shirts didn't cover. For some reason (be it embarrassment, extreme optimism, or the sheer fact that I was tired of bringing up even one more symptom to my doctor), I resisted in seeking help. Instead, I just tried to cover it up, but after about four weeks of enduring this ridiculous rash, (and seeing photos of myself at a party where my fancy dress exposed the rash and I looked downright silly because of it), I decided to call up my dermatologist. (My rheumatologist appointment wasn't for another two weeks.) I went in, and the doctor determined that it was, indeed, a sun/Lupus induced rash. He prescribed a topical steroid cream that wouldn't conflict with my other Lupus meds, and within 24 hours, the rash was gone.

What had I been waiting for? I knew I had photo sensitivity, but my typical sunlight symptoms (swelling, flu-like symptoms, fever) weren't present, so I tried to tell myself that this couldn't be Lupus. I learned that day that it doesn't matter what I think; I have Lupus, and there are plenty of doctors, medications, and preventatives out there to help me deal with it.

I'm curious to know what kind of photo sensitivity is out there amongst my readers. Does everyone have it? To what degree? Take a minute to fill out the poll at the side so we can see. Maybe it will show my friend that she's not alone!
Labels: doctor medication

Anonymous said…
Thanks for this post. It's good to hear reminders like this from time to time.

I've had Rheumatoid Arthritis for 11 years and to this day I'm still learning the lesson that acceptance is an integral part of disease management. Yet I'm still stubborn about things that I should know better not to be stubborn about. Ultimately, having a chronic disease really forces me to take better care of myself. My quality of life depends on it.
August 7, 2008 at 8:53 AM

Sara Gorman said…
How true! I read a how-to-live-with Lupus book once that talked about acceptance versus accommodation: People with a chronic illness not only have to accept their fate, they have to learn to accommodate it...for the rest of their lives. We have a very tall order in front of us - but I'm glad to hear that you've been fairly successful at managing (or at least learning that you must manage) yours. :)
Best wishes!
August 7, 2008 at 1:41 PM