Henry the pug has officially had his first adjustment issue. It didn't even pertain directly to Bun, but I'm sure if you asked him, he would tell you that it did. As an older sibling who is in turmoil over the fact that a new baby is arriving soon, to him, everything from here on in must be Bun's fault.

Two nights ago, we sold the overstuffed green chenille couch we've had for over 10 years (Johnny actually bought it before we were married) on craigslist. The day our buyers were coming to retrieve the couch, Johnny vacuumed, fluffed and spruced it up so that the nice new owners would not be taking part of Henry and Darwin with them when they left. (Pug hair and chenille = bad combination.)

As such, Henry and Darwin were not allowed to go into our family room for the better part of a day. We let them pay their final respects (there was much nuzzling as they had come to love the comfy green wonder), but then they were ousted from the room. You would have thought we had taken away a pacifier from a baby the way Henry was whining outside of the family room door. He was there for easily 25 minutes, smashed little pug face staring directly into the door, trying to will it open as he whined for his security couch inside. We finally pulled him away and distracted him with, you guessed it, food. He did a little more whining that evening, but thankfully, he was able to sleep through the night. (Apparently, even pugs have their limits for disrupting a good night's sleep.) The next morning, though, he seemed lost again. 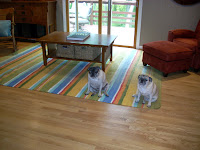 Interestingly, they're sitting in the exact same spots they did when the couch was there. 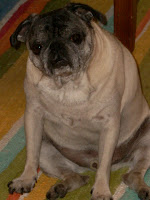 However, since the new couch has arrived, Henry has refused to go near it. Here's a close up of the embittered pug. He looks a little miffed, doesn't he? Wonder what face he's going to make when Bun tries to pull that cute, curly little tail of his? 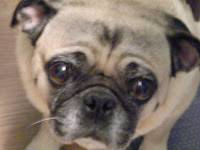 His brother, on the other hand, is a perfect gentleman, willingly adapting to his surroundings and to Bun's imminent arrival. I mean...look at this face. What's not to love?
Labels: pugs