ERG test: Advancements in eye exams to test for plaquenil toxitity right around the corner!

As far as tests go, the ERG is not one of my favorites. The ERG, or Electroretinography, is one of those tests that seems to last way too long and comes up way too fast. When the scheduled appointment comes up on my calendar, I'm find myself thinking, "Didn't I just have one of these?"

Of course, like many of the tests that we have for lupus, and the side-effects of the medication we take for it, (of which the ERG is one), it's a necessary evil. The test is done to detect any changes in the retina, in my case, due to the use of Plaquenil. My understanding is that it's not months on this drug that can cause changes, but rather, years.

I was on plaquenil for three years the first time around, before my opthamalogist detected some changes and recommended that I stop using the drug. It's hard to know what exactly those changes were, and if they were indeed from plaquenil, but my rheumatologist and I didn't question it. The opthamalogist saw something he didn't like, so we stopped using the medication. A few years later, I started the medication again, and have been successfully taking it for the past seven years, with no retinal changes detected at all.

But, like the rest of you who take Plaquenil, I do what I need to do to take care of my eyes. I visit my opthamalogist every six months to a year for regular checkups, and to take a visual field test (which happens to be another non-favorite of mine). And for the past few years, I've been making annual visits to a specialized opthamalogist who administers the ERG.

The last time I was in, I asked the nurse to take a picture of the computer screen that was recording the visual of my eye during the test. I hope this doesn't freak you out. If you remember, I can hardly even look at pictures of my own rashes, but this doesn't bother me. Probably because it doesn't even look like my eye - but rather, a ship from outerspace! 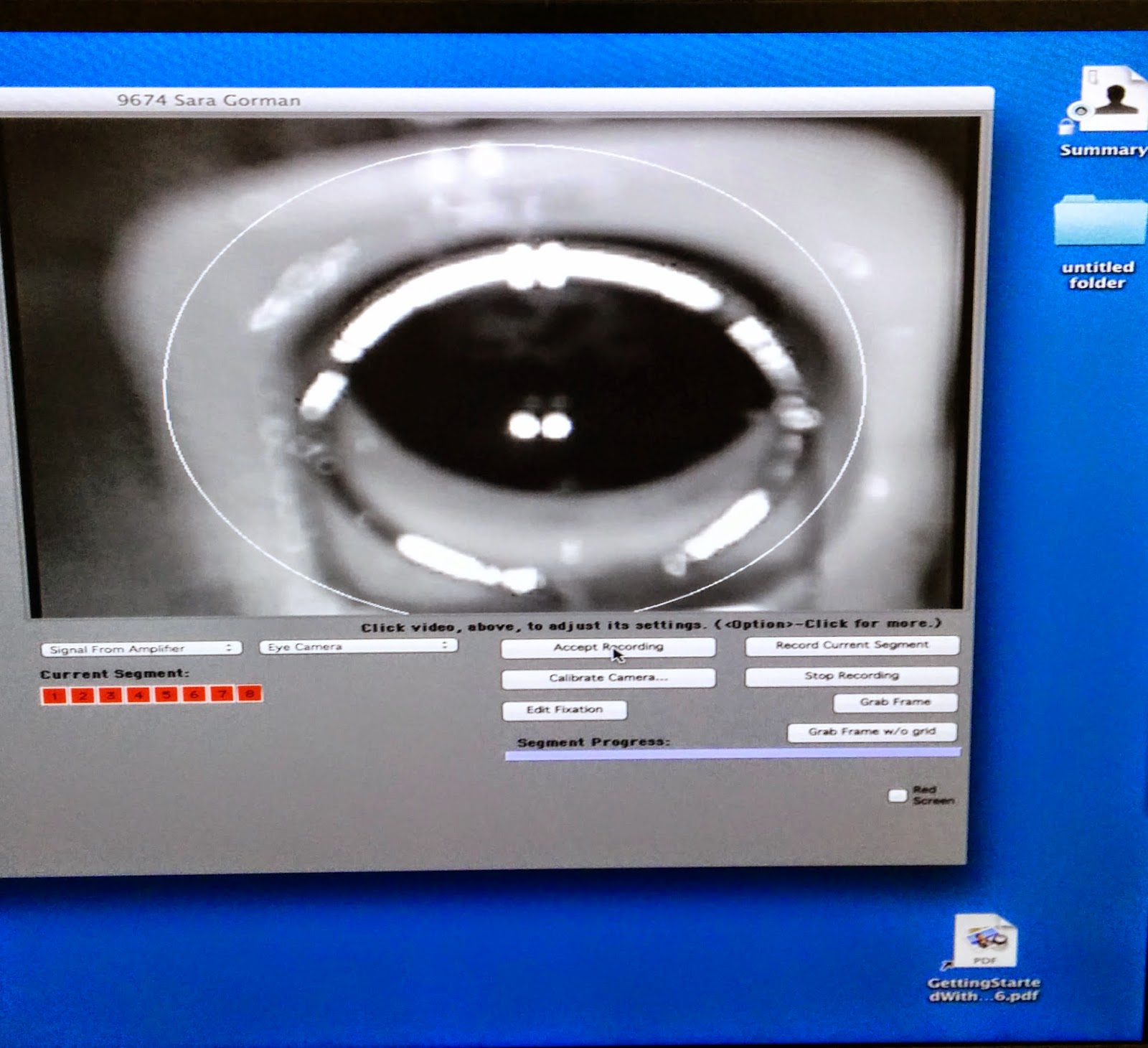 When my eye looked like this, my eyes were propped open with something like a thick contact lens, although it felt more like a big old monocle to me. Here's exactly what was happening:

How an ERG is done:

The patient assumes a comfortable position (lying down or sitting up). Usually the patient's eyes are dilated beforehand with standard dilating eye drops. Anesthetic drops are then placed in the eyes, causing them to become numb. The eyelids are then propped open with a speculum, and an electrode is gently placed on each eye with a device very similar to a contact lens. An additional electrode is placed on the skin to provide a ground for the very faint electrical signals produced by the retina.
During an ERG recording session, the patient watches a standardized light stimulus, and the resulting signal is interpreted in terms of its amplitude (voltage) and time course. The visual stimuli include flashes, called a flash ERG, and reversing checkerboard patterns, known as a pattern ERG.
The electrodes measure the electrical activity of the retina in response to light. The information that comes from each electrode is transmitted to a monitor where it is displayed as two types of waves, labeled the A waves and B waves. 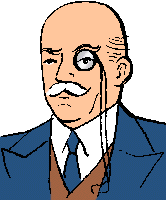 The best news to come out of my test this year? They're very close to administering this test a different way!
After we did this test with the monocle, I mean, contact lens, in my eye, the nurse administered the entire test a second time, this time merely taping a thin film over my eye.  No propping, no monocle, no discomfort!  My doctor is hopeful that by the next time I have the test done, they will have had enough data compiled (hence the reason I did the test twice) to determine that the thin film is just as effective as that big old contact lens. My fingers are seriously crossed. But it was exciting to be on the cusp of such technological advances in medicine!
Along those same lines, a frequent reader of my blog was kind enough to share another advancement in eye procedures - this time in regard to cataract surgery. You can read more about that here. Thanks, Jen, for sharing!

Below you can read a little bit more about an ERG. Enjoy!

Electroretinography (ERG) is an eye test used to detect abnormal function of the retina (the light-detecting portion of the eye). Specifically, in this test, the light-sensitive cells of the eye, the rods and cones, and their connectingganglion cells in the retina are examined. During the test, an electrode is placed on the cornea (at the front of the eye) to measure the electrical responses to light of the cells that sense light in the retina at the back of the eye.

Why is an ERG done?

An ERG is useful in evaluating both inherited (hereditary) and acquired disorders of the retina (like plaquenil retinal toxicity). An ERG can also be useful in determining if retinal surgery or other types of ocular surgery such as cataract extraction might be useful.
Labels: doctor eyes plaquenil

Maggie said…
This is a timely post for me. I've been on Plaquenil for 3 years without a problem, but at last week's visual field test, I had my first questionable outcome. I go back in 6 months, and we'll go from there, but I didn't know about more advanced tests or that you could find a specialized opthamologist to administer them. Very helpful info!
June 14, 2014 at 12:53 PM

NamasteDoc said…
Thanks for Information!
If you are looking for Online Doctor Appointment, NamasteDoc is a portal that enables online consultation with doctors in India. It connects patients to doctors online and manages appointments effortlessly. Book appointments anytime, anywhere as per your convenience.
http://www.namastedoc.com/

Debbie said…
I have now had a couple of retinal OCT scans for questionable spots related to plaquinil use - see this link:
http://www.optometricretinasociety.org/
and the paper on New Plaquinil Guidelines.
June 16, 2014 at 1:39 PM

Sara Gorman said…
Debbie- This is great! Thanks for sharing. Will post this tomorrow for those who want more details. My opthamologist is listed in the credits. I KNEW he was cool! :)
June 17, 2014 at 4:48 PM

Sara Gorman said…
Maggie - Glad the post was well timed! My hope is that the issue is a false alarm, but glad you're headed back in 6 months. Take care and thanks for commenting!
June 17, 2014 at 5:16 PM

Ann Utterback said…
Sara--Thanks so much for explaining the multi-focal ERG. I had one when I went thru my lengthy time of trying to get my Plaquenil Retinapathy diagnosed. It was an awful test, and I pretty much refused to come back for the second one in six months. Fortunately, my visual deficit has stayed the same once I stopped the drug. Did you see the Lupus Now article in the current issue? I campaigned to get that in print and I'm happy with how it came out. My feeling is if I can help one other person prevent the blindness I have, it will be worth it! Ann
June 18, 2014 at 3:00 PM

Sara Gorman said…
I will definitely check out the article! It seems like everyone mentions that rare ocular side effect of plaquenil, but u don't read much detail about it. I look forward to reading about it more! Thanks and hope you're well!
June 23, 2014 at 11:35 AM

Eye Destination said…
The particular eye continues to be called essentially the most intricate body organ within our body. It really is remarkable that one thing so little might have so many doing work elements.Although the fact that precisely how tough the work of delivering eyesight really is,perhaps it really is absolutely no ponder in the end.