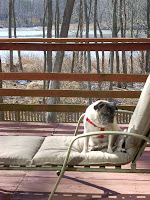 You'll be happy to know that Henry the Pug is settling into his routine, despite the fact that he permanently lost his eyesight about 6 weeks ago. (Here he is, enjoying the warm spell out our back porch. Of course he's not really taking in the view from his angle...but he was quite content, nonetheless.) He's getting around the house pretty well, using that smush face of his to feel for walls, doorways, bouncy seats and baby swings. He's even learning to get to his food and water bowls by himself, although he seems to prefer whimpering for a few minutes before he makes an attempt, giving his mom and dad ample opportunity to lead him there first.
Overall, I'd say that he's done a pretty good job of adjusting. While there were day

s that we were impatient, angry and frustrated, Henry never seemed to lose his temper. Sure, he was a little out of sorts, but he never lashed out or became aggressive in response to his new limitations. When I imagine myself in the same situation, I can just feel the frustration and anxiety building. If I had gone blind, I would be so angry about not being able to function the way I used to, even for simple things like styling my hair or picking out clothes to wear. I know I would learn to do these things, but I would definitely resent the fact that I had to figure out a new way to do them.

And that, in a nutshell, is exactly the way I felt when I had to readjust my life for Lupus. I hated the fact that I couldn't function normally. I didn't want to make accommodations for my disease and it made me angry when I was forced to do so. Not being able to close my arthritic fingers around a fork, buckle a seatbelt or work a full day were limitations that just about drove me crazy. But the fact of the matter is that, for a short period of time, I was unable to do these things, as well as many others. Were anger, resentment and frustration helping my situation? I don't think so.
I know I needed time to grieve for my losses and adjust to my new life with Lupus. But now it's easy to see that the sooner I moved on from that resentment phase, the sooner I could start figuring out solutions to the everyday obstacles I encountered. And the sooner I did that, the sooner I'd feel like a normal person again. I got there eventually - but oh, the time I wasted being mad!
So kudos to baby Henry for never letting frustration and anger slow down his adjustment period.
Is it surprising that once again, there's a lesson to be learned from Mr. Pugalito?
Labels: lifestyle pugs