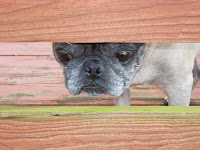 Since Mr. Henry (the pug) went blind last week due to diabetic cataracts, we've made some adjustments to try and accommodate his current condition. He goes to the bathroom in a new place outside (to avoid stairs), he is confined to two rooms in the house so that he can become ultra-familiar with his surroundings, and we talk him through even the simplest of routines (like going from the linoleum in the kitchen to the hardwood in the family room). His spirits are high, and even though Johnny and I find our patience running thin every once in awhile, we are thrilled that Henry is making as much progress as he is.

I've found that the hardest part of having a blind dog is allowing him the freedom (and time) to figure out how to cope without vision. It's taken up to 45 minutes just to get Henry from the kitchen to the front door so that he can go outside -and then another 20 while he figures out where and how he should relieve himself. (Don't even ask how long it takes for him to get back inside and back to the kitchen.) He's getting more efficient every day, but it's been very tempting to just pick him up and carry him out so that he can get the job done. He hates when we do it though - watching him try and re-orient himself from scratch isn't any fun (I'll liken it to a panic attack.) We've succumbed a couple of times, which isn't so bad, so says the doctor, but we know deep down how important it is for Henry to exert his independence and find his way around on his own. 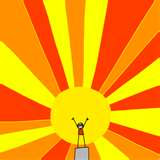 In watching Henry, I'm reminded of my own experience with Lupus. When your health has been compromised, the last thing you want is to have someone else doing everything for you - as if you can't help yourself. While I realize Henry doesn't suffer from the exact same psychological effects that I do, I know he needs his space. Our vet has confirmed that it's best to let Henry be Henry, as pampering him too much is only going to prevent him from learning how best to deal with his new situation.

I can tell that he likes figuring things out on his own. He wags when he manages to find his way outside, and seems pleased when he makes it to his bed independently. Most of all, he likes being treated the way we've always treated him - like a perfectly, normal little puglet. Certainly not like an invalid. (Although if bonbons were included in the "invalid" scenario, he might think twice.) The next time I start to rush Henry from one place to another, I'll remember how much I appreciate being treated like a normal person, despite Lupus.
Labels: lifestyle pugs

Katie G Rice said…
Did you happen to tell the vet that it's too late- Henry has been pampered his whole life? :)
That's okay, though. His Aunt Katie loves him very very much.
January 7, 2009 at 10:19 PM

Sara Gorman said…
Pampered, schmapered. That guy works hard for a living. And yes, his Aunt Katie DOES love him very much. He's one lucky pug.
January 7, 2009 at 10:56 PM