Thank goodness Baby Bun has put on some weight!

Because Momma has, too!

We had another 2-week appointment on Tuesday, and all went well in Bunland. The amniotic fluid is looking good, the PR interval (heart monitoring) looks great, and Bun is measuring and weighing in at the 48th percentile, which is just right. Bun weighs approximately 1 pound 12 ounces, and has a head that measures 23 cm (approximately 9 inches.) AND from the sonogram measurements, it looks as though Bun has Johnny's legs. How exciting!
Here are some details on the PR interval, which is the way my doctors are able to check for congenital heart block in Bun (caused by the SSA Lupus antibody I carry.)
P R Interval: The time elapsing between the beginning of the P wave and the beginning of the QRS complex in an electrocardiogram; it corresponds to the atriocarotid interval of the venous pulse.
And how do you interpret an electrocardiogram (EKG, ECG)?
The first tiny spike is called the P wave, which represents the contraction of the upper chambers (atria) of the heart. 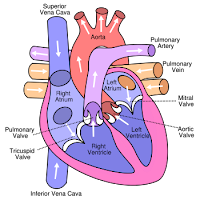 Next, there is a short, flat pause called the PR interval, which is the space between the P wave and the R wave. The PR interval represents the time between when the electrical signal causes the atria to contract and when that signal causes the ventricles to contract. Normal values lie between 0.12 and 0.20 seconds. First degree atrioventricular block is diagnosed if the PR interval is greater than 0.20 seconds. Because Bun's PR intervals are normal and there is no lapse detected, it is determined that Bun's heart is doing A-okay.
Continuing on in the electrocardiogram interpretation, next, there may be a small dip called the Q wave (it may not be present) followed by a tall spike called the R wave and another small dip called the S wave. Together, the Q, R, and S waves (called the QRS complex) represent the activation of your left and right ventricles. The pattern of the QRS complex depends on the location of the electrode recording it.
Last is the T wave, which represents the resetting, or repolarization, of the electrical cells in the
ventricles. By contrast, the resetting of the cells in the atria actually occurs while the ventricles are contracting, which masks the signal so it does not appear on the waveform. When the ventricles have reset, the entire cycle repeats and is represented by a new EKG waveform.
Similar to the PR interval, the ST segment is the portion of the waveform from the end of the QRS complex to the beginning of the T wave, and the QT interval is the portion from the beginning of the QRS complex to the end of the T wave.
On the EKG reading, the height of the waves reflects the strength of the electrical signal as well as the overlap of the opposing signal. Since the paper on which the tracing is made (or the electronic display, which in Bun's case, is the sonogram) moves at a fixed speed, the space between the waves shows how long it takes for the signal to pass through the heart.
By looking for differences between the pattern of the heart's electrical signal and a normal signal pattern, a health professional can identify problems with the heart's rhythm or indirect evidence of problems with the heart's pumping action. Several aspects of the EKG, including heart rate, heart rhythm, and abnormalities of the QRS or ST segments can indicate further complications.
Taken from WebMD: http://www.webmd.com/hw/health_guide_atoz/tu6195abc.asp
Labels: baby pregnancy

I can totally relate to your pregnancy. I had two successful pregnancy and I'm a lupus patient. I was on lovenox injections twice a day. My girls are 5 and 2.

Sara Gorman said…
Thank you so much for sharing - I'm so happy to hear of your successful experiences! I'll look forward to hearing from you again soon.
July 10, 2008 at 6:16 PM

Anonymous said…
Hello--I found your blog today and enjoyed reading it. I also have lupus with SSA/SSB antibodies and am 16 weeks pregnant. I am having my first fetal echo next week and appreciated your thoughts on the procedure. I look forward to following your journey and wish you good health and happiness. I am already a mom and have to say, motherhood is the best!
July 17, 2008 at 11:58 PM

Sara Gorman said…
Glad to hear that you're having a successful pregnancy, too! Best of luck, and I look forward to hearing from you again soon.
August 2, 2008 at 11:50 PM