I thought it might be time for another excerpt from my book, Despite Lupus. This one comes from the second chapter called "Looking Within", from the section titled "Control." The chapter title is the same as the title of a beautiful piece of artwork currently hanging in our home. It was a gift to my husband and me from a very talented artist who is a longtime friend (and former pia 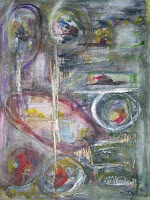 no teacher) of my husband's. When she painted (and titled) the piece of artwork, she had just finished her first round of kidney dialysis. Pictured at the left, you can see for yourself just how talented she is!

Chapter Overview: Making the choice to live well may be difficult, so you must look within yourself to find out how to make your strengths work to your advantage.

During the course of my first two and a half years with Lupus, I made more than a dozen trips to the hospital for various out-patient surgeries, emergency room visits, and invasive procedures and tests. Never once had I been held overnight, but even still, I considered myself pretty comfortable with the whole hospital routine in general. At the end of this period, I became very ill, and my rheumatologist thought it best to admit me to the hospital, due to the possibility of internal bleeding and other alarming symptoms for which he could find no explanation. Although he told me that I was being admitted, he didn’t mention the concept of being held overnight. Therefore, my expectations were the same as always: to be seen, evaluated, and released over the course of the same day.

When my doctor told me later that evening over the phone, that no, I would in fact be staying overnight, I was in disbelief. As I hung up the phone in my hospital room, I burst out into tears. I knew I was sick, and I wanted answers, but this overnight business wasn’t part of my plan. I hadn’t expected nor had I chosen to stay overnight, and yet there I was, forced into a situation over which I had no control. I felt duped, even trapped, not by my doctor, but by the disease itself. Lupus had finally ascertained control of the situation, and I hadn’t prepared for that to happen. I’d always been able to rise beyond her wrath and regain command of the situation, even if in my own twisted, optimistic mind. But not this time. I probably should have been more nervous about was wrong with my body (since I ended up being hospitalized for seven days), but the thing I remember the most about that night was the utter despair I felt when I saw my deliberate, purposeful, well-planned life falling apart before my eyes.

Never before had I felt such vulnerability or helplessness. The tears that came throughout that evening were filled with pain, resentment, and disappointment that I didn’t even know I had. The feeling of failure was overwhelming, as if I could feel the last strand of control slipping from my fingers into the hands of the disease. I was powerless, and it was the most terrible, disparaging feeling I’d ever experienced. My life had become utterly unmanageable, and I could no longer separate my life from my disease. They had become one in the same, no longer two separate compartments of my mind. Lupus was out of control, and so was So it was there, amongst the tears, the desperation, and the solitude, that I decided that my life with Lupus was going to change. Truth was, it already had; I was just catching on to the fact.

Understandably, we are resistant and reluctant to change, especially when we’re not the ones initiating it. No one enjoys relinquishing power or having their life’s agenda rewritten without their consent, including you and me. Having and maintaining control over our lives gives us confidence, stability, and peace of mind. We feel good when we assert ourselves, content and settled when life follows the path we intend. But when life is forced upon us, without our consent or expectation, as our chronic illness has been, we panic. We rush to defend ourselves against the intrusion, fighting to preserve the comfort and control we’ve always known. Not only are we seizing the past, we’re grasping at the future. We believe our plan is the only one that will lead us to our desired destination, and anything else is a ruse. If we don’t push, kick and scream against the unexpected tangents of life, life itself is liable to pass us by completely.

Like a kid who’s exhausted but refuses to go to bed, we convince ourselves that everything fun, exciting and worthwhile will happen if we let someone or something tell us what to do. If we yield, our chance to live life to the fullest will be lost. But step back for a moment and ask yourself where your controlling, stubborn behavior has led you thus far. To a life worth living,or to a life of never-ending struggle, illness, and loss?

Thinking you can beat this debilitating disease without compromising one iota of your life is what perpetuates the cycle, but two things can end it: your body giving out or you giving up control. Unfortunately, the former can and will happen, although we don’t like to admit that it’s possible. We think we’re invincible, but in fact, the body can only tolerate so much suffering. If pushed too far for too long, our bodily functions will slowly, but assuredly begin to fail. It’s only a matter of time. However, this result never has to be considered, if you’re able to relinquish the control you’ve been holding onto so desperately. In doing so, you are instantly relieved of the burden to force order, method and purpose into your life. It releases you from your futile attempts to possess a power that, perhaps, isn’t yours for the taking. It prevents you from killing yourself trying to keep to a path that isn’t necessarily set in stone. Where you’ve been merely struggling to survive, you can, at once, begin to thrive.

“Thrive”: Make steady progress; be at a ; grow strong and healthy.[1]