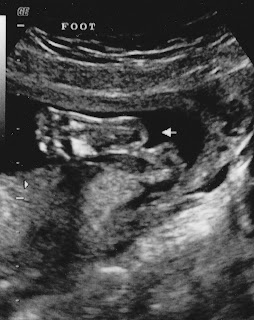 Okay, first things first. How adorable is this foot????
***
For those of you who aren't particularly adept at viewing sonograms (and other people's children's sonograms at that!), the heel is right next to the head of the arrow, and the toes are pointing to the left. This is my favorite shot of KitKat to date, although the profile shot below is pretty cute, too.
***
So what do you think? Boy or Girl? I know, I know...if I wanted to know, and if I'm going to keep bringing it up over the next four months, I should just find out. But Johnny and I LOOOVVE not finding out. Being surprised at the end when the baby is born is just the greatest...and I get to drive my sister and mom bonkers for the next few months. The best of both worlds!
***
So the latest on KitKat is as follows: 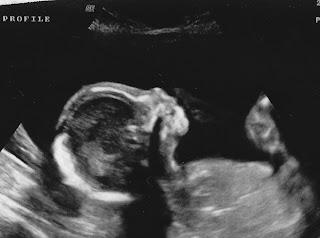 No news (which is good news) on the PR Interval/Congenital Heart Block (CHB) issue.
***
(See an earlier post from my first pregnancy for background info on the above.)
***
The songograms thus far have revealed no sign of heart block in the baby - 2 sonograms down, 5 or 6 more to go. I recently received a bit of an update on the congenital heart block issue - that being that there is very little that can be done if the issue presents itself.
***
During my last pregnancy, I was under the impression that if the condition developed, a course (or more) of steroids would be administered to me, and that would alleviate or reverse the problem. Turns out that really isn't the case. In early detection, when the heart block is just in the very, very early stages, yes, the steroids may help. But typically, once the heart block is detected, it seems that very little can be done to reverse the problem in utero. Once the baby is born, the issue is dealt with immediately - and treatment can range from minor to more severe, the latter requiring a pacemaker. This was, at first, a bit disconcerting (because all this time I kind of thought I had an "out" if it happened), but as is always the case, there's no benefit to worrying. The heart block happens in very few lupus cases, but if it does, just like everything else in life with lupus, we'll just adjust. There's nothing I can do at this point to prevent baby KitKat from developing CHB - so if it's to be, we'll just be as mentally prepared as possible!
***
(My sister-in law and brother-in-law are leading by example in this regard, as they are currently nursing a beautiful baby girl through the latter stages of preemie-dom (little Miss Maggie was born at a mere 26 weeks on April 15th), and is doing beautifully as of today. They did everything they could to keep Miss Maggie in utero, but that little lady wanted out. So they just adjusted their thinking, and adapted to the fact that the first few months with Maggie wouldn't be quite as planned. But have those months been miraculous? I'd say so! You just can't plan some things - but I suppose it's better that we can't. We'd probably forget to pencil in life's little miracles, you know?)
***
So my CHB sonograms are every two weeks until 30 or 32 weeks, and then we're back to our normal appointments. Of course, at that point, we start the more frequent visits because we're nearing the end of the pregnancy. SO - KitKat, Johnny and I are going to get to know one another quite well in the coming weeks. Just keep your legs crossed, KitKat...remember, we don't want to know!
***
In other big news, KitKat is hanging out in the breech position right now, and has been for the last three weeks. Two weeks ago, I was excited because I'd never had a baby in the breech position.
***
(For those of you wondering why I was "excited", remember - I'm the one that calls every vacation, "the best ever", is extremely excitable, and thinks anything new and surprising is super fun.)
***
Now, of course, as the weeks tick by, I'm thinking that this breech thing isn't all that exciting. (You knew I'd come around...) I know there's plenty of time for KitKat to turn, and my doctors say not to even think twice about it...but of course, I googled "how to turn your breech baby" today. And boy, did I get an ear full (or is that a web page full?) There were dozens of exercises I could do to encourage KitKat to flip over...most of which required a considerable amount of contortion. As as many of you can imagine - I'm not in a contortionist-type mood. Not with this big ole' belly out front. (Note that by including the link above, I'm not condoning the exercises. Please check with your doctor before starting these or any exercises during pregnancy.)
***
So for now, Kit Kat will be staying put, unless the baby decides on his/her own that it's time for some gymnastics. Good news is that one of the recommendations to turn the baby is to go swimming - allowing the weightlessness of the water to encourage the baby to flip. Deirdre and I have that covered, as our new favorite hangout is the pool we joined last summer. PLUS, they sell food and have plenty of shade. What more could this lupus preggy ask for! I say lupus and pregnancy do mix...poolside.
***
Stay tuned for more on KitKat - and of course, now that due time has been spent blogging about the "youngest" member of the family, I'll be sure to post a few select pics or videos of Deirdre in the coming week. It would only be fair!
Labels: baby pregnancy