It's confirmed: Deirdre really IS perfect! 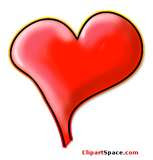 We recently had a follow-up appointment with Deirdre's pediatric cardiologist, and all went well.
When Deerdeepants was born, the doctors discovered that she had a slight heart murmur, the kind that is commonly referred to as a Ventricular Septal Defect (or "VSD".) The septum is a wall that separates the heart's left and right sides, and a VSD is a defect that is between the heart's two lower chambers (the ventricles).
If the opening between the ventricles is small (like Deirdre's), it doesn't strain the heart. In this case, the only abnormal finding is a loud murmur. However, when it's a large opening between the ventricles, a large amount of oxygen-rich (red) blood from the heart's left side is forced through the defect into the right side. Then it's pumped back to the lungs, even though it's already been refreshed with oxygen. This is inefficient, because already-oxygenated blood displaces blood that needs oxygen. This means the heart, which must pump more blood, may enlarge from the added work. High blood pressure may occur in the lungs' blood vessels because more blood is there, and over time, this increased pulmonary hypertension may permanently damage the blood vessel walls.
The cardiologist who saw her in the hospital assured us of several things:
1) The small opening Deirdre had was a very common defect, one that typically closes up within the first two years of life.
2) In the case that the opening did not close up, it would never develop into anything that would keep sweet little Deirdre from doing anything. It wouldn't curtail her activity level, her breathing capability, or the oxygen level in her blood. Sure, she might have to see the cardiologist every once in awhile, but that would have been it.
3) The defect was not caused by me having lupus; it wasn't caused by any of the medications I took during my pregnancy for lupus; it didn't have anything to do with the congenital heart block checks we did every two weeks throughout my pregnancy (because of the SSA antibody I carry due to lupus); nor did it have anything to do with the fact that I have mitral valve prolapse (or "MVP"), also known as a "leaky heart".
MVP is a very common heart defect which occurs when the valve between your heart's left upper chamber (left atrium) and the left lower chamber (left ventricle) doesn't close properly. When the left ventricle contracts, the valve's leaflets bulge (prolapse) upward or back into the atrium. Mitral valve prolapse sometimes leads to blood leaking backward into the left atrium, a condition called mitral valve regurgitation.
Bottom line - that nasty disease called lupus and Deirdre's mother had nothing to do with her VSD. Yippee!
And the best news is that when we went in for her 6-month follow up appointment (which actually took place closer to her 7-month anniversary), the doctor confirmed that the opening had closed!!! Double Yippee!! Poor little Deirdre had to withstand an EKG (her little chest was covered with about 10 electrodes...there was hardly enough room for the stickies!) and an ultrasound (the little paddle they used was about the size of my thumb), but she didn't seem to mind the tests. In fact, I think she kind of liked the attention.
So - Deirdre is officially done with the cardiologist for the foreseeable future. We never have to go back because, as I said, it's been declared that Miss Deirdre Colina Gorman is 100% perfect, from top to bottom, inside and out. (But her dad and I already knew that, of course.)
Want to see a few pictures of our perfect little angel? Eat your heart out! 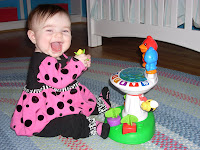 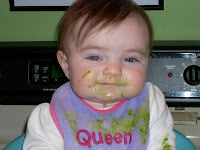 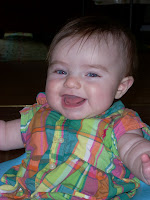 Sara Gorman said…
Thanks! As you can see, Deirdre's hitting the hard stuff (aka solid food) - what a fun time. Messy, but fun.

Marilyn said…
Beautiful, Beautiful Perfect Baby! I can feel your excitement for your great checkup....it does a heart good! I'm so funny! And have I told you lately how much I love prednisone, seriously, it makes me feel great!
May 12, 2009 at 7:49 PM

Sara Gorman said…
So glad you're feeling good! That magic little pill really does the trick sometimes. Glad to hear it!
May 16, 2009 at 10:50 PM