Although I've barely scratched the surface as far as Baby Bun's provisions go (i.e. scoping out baby furniture, strollers, and bedding), I realize that I've been "preparing" for Baby Bun for a long time. The way I see it, I started about 4 years ago.

In 2004, I resigned from my full-time, management position to work part-time from home as an associate in the same department of the company. It was an entry-level job I moved into, but my health was deteriorating at such a fast rate that my body couldn't tolerate the long hours or demanding schedule of my job as manager. At the pace I had been going, I was never going to be healthy enough to bear children. Contemplating adoption even seemed out of reach, since I could barely care for myself, much less another little life. The day I started my new position, I knew I was laying the groundwork for my future; some day, down the road, I was going to enable myself to become a mom.

The second stage of my baby preparation came two years later, when in 2006, I turned in my final resignation to the company and decided to focus on getting as healthy as possible. My part-time position had proven that the less I worked, the better I felt, so my husband and I opted to explore the concept that perhaps not working at all would mean reaching optimal health. Thankfully, we were in a financial position that allowed me to quit my job, and I had reconciled within myself any doubts I had about losing my identity along with a career. Reassured by the fact that this major, life changing experience would bring me closer to my future of living well with Lupus, I knew it was the right thing to do. And still included in my definition of "living well" was the prospect of having children down the road.

Stage three was the easiest: In 2007, my doctor and I took steps to prepare my drug regime for the prospect of pregnancy. I was tested to see if I could take Imuran, which at the time, my doctor felt was the #1 alternative to CellCept (which was and is not recommended during pregnancy.) Although my test results revealed that I was a candidate for Imuran, my doctor changed plans and suggested that we use Plaquenil instead, deciding that it was the best choice for my condition and circumstances. I added Plaquenil to my regime on June 1st (taking it along side CellCept), and then a month later, I stopped CellCept altogether. I was nervous leading up to the actual day I would stop my wonder drug, but I knew that this was part of my preparation. If the swap didn't go well, I'd know Baby plans would need to be put on hold.

As it turned out, I had nothing to worry about. From one day to the next, my body didn't miss the CellCept. Plaquenil seemed to be an adequate substitute (although years before, it hadn't been strong enough to keep my disease under control), and I was one step closer in my baby preparations.

And if you've been keeping up with my blog, you know the rest. Once I waited three months after stopping CellCept, I got the go-ahead from the doctor, and about three months after that, Baby Bun arrived on the scene. There's not one day that I don't feel blessed and honored to be caring this little munchkin. Becoming pregnant wasn't a super-simple process for me, but having experienced nothing but utter happiness for the past 20 weeks, I know that this little life inside of me was worth any sacrifice I might have made along the way. Although I now know they weren't sacrifices, but mere stepping stones. 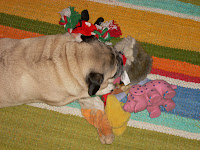 As the boys and I continue to prepare for Baby Bun's arrival, Darwin and Henry test out more of BB's stuff:

On the right, Darwin make s sure that all stuffed animals pass his high safety standards: no small pieces, sharp edges, or ill-tasting toys, while at left, Henry tests the stability of the building blocks. Are they wind resistant, sun proof, and can they withstand a pug's snore?

Now I just have to continue my own preparation process by securing daytime, nighttime (or all-the-time!) help for the time after Baby Bun arrives. I've been told that you can never get enough help, but I'm not sure if I should be looking for full-time help (in case I'm very ill, post-delivery), or just part-time help. I know I'll need at least a few days a week where I'm guaranteed to be able to crash for a few precious hours. I won't be any good to BB if I'm not well myself, so I have no plans of pulling any superwoman feats. I know we'll ALL be better off if Mom is well-rested. Wish me luck!

DC said…
Your furbabies are too cute!

Congrats on the pregnancy. I'm where you were a year or two ago: still mourning the loss of my job (and the resulting loss of my identity) and desperately wanting to start a family. I'll continue taking Plaquenil through my pregnancy (if I ever get there).

Sara Gorman said…
You will get there! And I can tell you first hand, now that I've been pregnant...carrying the child is a wonderful thing, but raising, loving, and nurturing this little baby is what will matter most.

When I, myself, was considering adoption, but wanted to get pregnant, a friend of mine asked me: What's most important to you? Do you want to give birth, or do you want to be a Mom? And I so now understand, it's the idea of being a mom (no matter how) that is important. Carrying the little guy (or gal) is just an extra little step (actually...it's not so little!)
June 5, 2008 at 6:51 PM