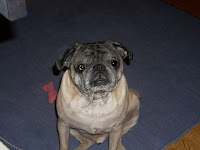 It was bound to happen. Those of you who know me had to assume that if I was going to post a picture of my"baby on the way", I would find a way to post pictures of my other two babies who are already here! For those who haven't been introduced, let me present Henry Gorman, age 8, pug extraordinaire. We've had Henry since he was a baby, a mere 8 weeks old, and he's been a lovable handful ever since.
His brother, Darwin Gorman, age 7, is the nicest pug you will ever meet. Darwin (Dar o 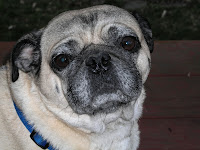