With all my talk about my lip swelling yesterday, I was reminded of what it used to be like to have that insufferable symptom crop up every week or two. I used to get so frustrated when it would happen, primarily because I had no way of predicting when it was coming on, nor could I stop it once it started. Sure, I had a concoction of pills I would take to try and stop the process (Prednisone, a steroid, and Zantac and Zyrtec, both antihistamines), but the drugs could take anywhere from 3 to 24 hours to start working.
After awhile, I learned that instead of continuing to focus on the physical problem, I needed to start working on an emotional (and angst-free) solution. For me, that meant sitting back, taking my medication, and making light of my situation while I waited for the medicine to take affect. In fact, my family was a tremendous help in making my situation more bearable.
My parents would often call and ask how my Luppie Lips were from day to day, and my husband started referring to my affliction as Lippus (vs. Lupus, of course.) My sister helped too - she'd put on extra pouty gloss and lipstick to make her lips looks extra full in an effort to commiserate with me. My in-laws even played along. I remember being at their house one weekend, on the downswing of a swelling incident. We got in the car to head out for the day, and I made a joke about there not being enough room in the car for the four of us, plus my lip. They said something to the effect that we could take the bigger car to ensure that there was enough space.
Even my rheumatologist would refer to me as "Angelina" from time to time - telling me he thought the lip enhancement was a good look for me. Of course, he usually only saw me the day after an incident, when my lips just looked extra pouty rather than mildly deformed.
You wouldn't believe how much these light-hearted comments helped. It made me feel as though it wasn't just me alone, fighting my monster-truck lips. Even Henry our pug was willing to get into the groove. When Johnny and I used to both work long hours at the office, our dog sitter (and good friend Aria) usually came by the house around 3pm to let Henry outside. He'd do his business, and then wait for us to come home later that evening. One day, we came home, and there was a note from Aria, telling us that Henry was limping, and seemed to have a stiff leg. By the time we got home, he was still limping a little bit, but by the end of the evening, he'd seemed to work all of the kinks out. We got such a kick out of our dog sitter's diagnosis, that we started saying that Henry must have had a temporary case of Limpus.
Here's a pictur 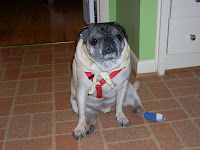 e of him demonstrating a case of Limpus, although this recent instance was due to a nicked toe pad after a nail trim at the vet. No need to send get well cards just yet. He donned this wrap cast for a mere eight hours, and when it was removed, he was a good as new.
Here's hoping that neither Henry nor I have any cases of Limpus, Lippus, Luppie Lips, (or Lupus flares, for that matter) anytime soon!
Labels: lifestyle

Zoe said…
Wow! You have angioedema and lupus too!? Is it idiopathic or allergic or...?! Hope you've got it under good control now.