The best lupus litmus test: What does Darwin do?

You're well aware that, over the years,  I've relied on my pug pups to aide in managing my life with lupus on more than one occasion. They encourage me to sleep, force me to stop and smell the roses, and remind me that asking for help isn't something to be ashamed of. Instead, I should walk tall when I'm smart enough to let someone else do for me that which I cannot.

(My late pug Henry had a tendency to take this last rule of thumb a bit too far; it wasn't really what he couldn't do...it was merely anything and everything that he didn't want to do.)

You can read about my pugs' ability to keep me living well, despite lupus here, but here's a quick excerpt from a past post:


Because our pugs tend to wake up in the middle of the night and need a drink of water, we've placed a water bowl in the bathroom off of our master bedroom. Johnny and I do our best to fill up the bowl before going to bed, but every once in awhile, we forget. When Henry wakes up in the middle of the night and it's empty, he doesn't hesitate to ask someone to come to the rescue. His first attempt to get help is to tip the empty, plastic water bowl over with his paw so that it topples over and clanks, clanks, clanks against the tile floor. It's a wonderful sound to hear in the middle of the night, I can assure you, but most of the time, it gets our attention. However, if neither of his parents come running fast enough, Henry comes out of the bathroom, looks up like, "Uh, Helloooo. Didn't you hear the empty bowl clanking on the floor?" and gives a bark or two. If this still doesn't arouse us in the time he deems appropriate, he heads to the door stopper attached to the wall, and gives it a couple of "boing, boing, boings" to make sure we know he's in desperate need of water. Poor guy. Maybe he shouldn't head to the salt lick so soon before bed.
I was the exact opposite. I NEVER asked for help, and avoided doing so whenever possible. Henry reminded me that there are people in this world who are very willing to help, if you simply ask.

Just recently, my other pug Darwin enlightened me to another truth - the (almost) unavoidable exhaustiveness of the holiday season. I used to kid myself that the weeks leading up to the December holidays weren't really that crazy. If things did get a little frenetic come the week before Christmas, it was simply an endurance test. Could I get it all done, and not break a sweat? In years past, I've given into the frenzy, refusing to admit that maybe I just couldn't handle it all. I believed every last gift had to be perfectly chosen, wrapped, and delivered with days to spare. That Christmas wasn't really Christmas unless 6 different batches of cookies were made. And if I did show signs of wear and tear due to the flurry of activity, I was failing the test.

So much for poor perspectives on Christmases pasts!

All that, of course, is a bunch of malarkey. We most likely cannot and should not strive to do it all. We're bound to miss a detail here, and let something slide there. And if we're really smart, we're going to let those things go intentionally. Because the purpose of Christmas is to enjoy time with friends and family. To do that, we have to be well. So skipping "x", or passing on "y" in order to finish out the year happy and healthy is actually a measure of our success, not failure.

Baby Darwin, too, has his own measure - an exhaust-o-meter, if you will. Whatever time he rises in the morning indicates whether or not he (which usually translates to we) overdid it the day before.

Most days, he gets up with us at 7am. He bids Deirdre farewell before school, and then retires to the couch for a mid-morning siesta. On mornings when he's really worked himself over the day before (i.e. watched while we worked ourselves over with various tasks, to-do's, and busyness), he sleeps in. I see him closer to 8:30 or 9. Sometimes before Bernie goes to school. Sometimes right after I come home. Either way, I know he just needed that extra shut eye to reset the meter.

So a few weeks ago, when he didn't come down first thing in the morning, I shouldn't have been surprised. It was the morning after we threw our big annual Christmas party...and I knew he'd be tuckered out. After all, there was a lot of pressure on him to greet every person at the door, keep track of every low hanging plate, and anticipate exactly when the appetizers would come out of the oven. 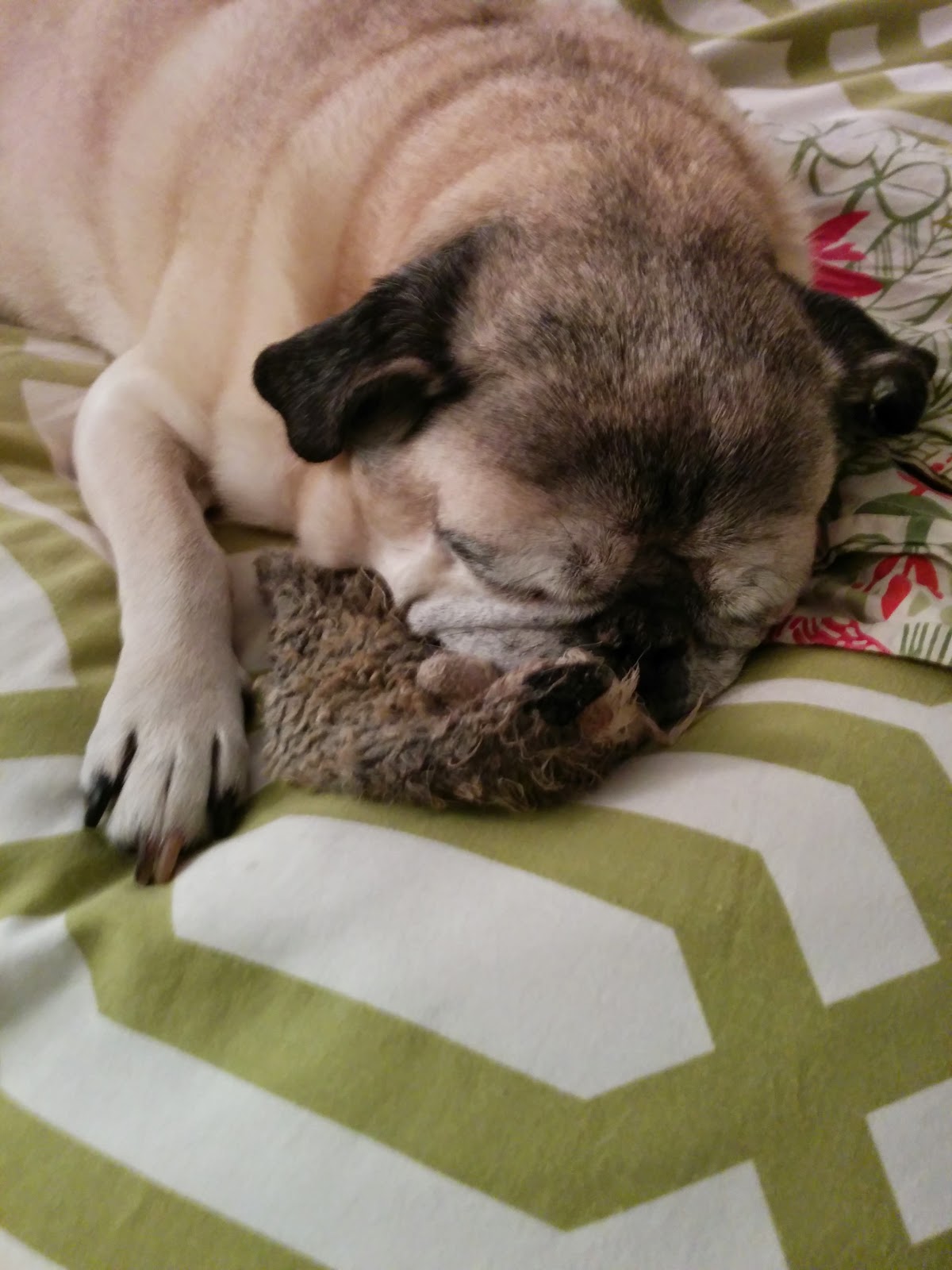 But when he didn't mosey down the stairs for the first time that day until 1:30pm, I knew it had been a real whopper of a party. (I'd checked on him throughout the morning, but he just kept snoring away.)

His actions caused me to pause...because if he had to work extra hard to entertain, monitor, and manage all evening long, we most likely had to do the same. Because of Darwin's ability to selflessly lead by example, I decided to take an early nap that day. After taking care of his business, it was no surprise that Dar managed to come right back upstairs to sleep with me for another two hours.

Playing host takes its toll, after all. Especially if you're as good a host as this guy!