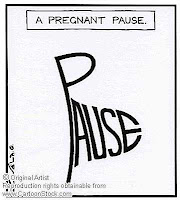 Call off the dogs! Monday's induction is off!

We just got back from the doctor this morning, and based upon an exam of my cervix (which is posterior right now - meaning tilted back, not forward),  my doctor has moved my induction date. Apparently, Bun has no intention of going anywhere anytime soon, and because I'm having such a successful pregnancy thus far (i.e. Lupus is under control), they're going to let me go a little longer before they induce (so I can have the greatest possiblity for a vaginal birth). I go back in on Tuesday the 7th for a check up, and then again on Friday the 10th to see if things have progressed. If nothing's changed, the plan is to check into the hospital on Tuesday the 14th, to be induced on Wed the 15th. The doctor doesn't want to go any later than 39 weeks (which would be the 15th), so I think that's a pretty drop-dead date, but then, I thought the 6th was too!

I'm thrilled for the delay. Not because I'm not ready to meet Bunorama, but because I just got a whole week of my life back! It really does feel a little bit like Christmas. Plus, I kind of like the spontaneity of the whole thing. Who knows - maybe my water will break or I'll go into labor, just like in the movies. More than anything, I'm pleased that the pregnancy is going so well that there's no mad rush to uproot Bun too early.

My only challenge now is to convince Johnny that just because we have an extra week or so, it doesn't mean that he should put off painting the handles on Bun's dresser. Bun would want the nursery done by Monday anyway, don't you think? (Please say yes!)

Anonymous said…
We'll be thinking about you this week, and looking forward to the news!

Enjoy the extra free time (and Johnny, we think those handles should be the A1 priority tomorrow!). :)

Sara Gorman said…
The dutiful husband and dad-to-be finished the handles early on Sunday, I'm happy to say. Thanks for the words of encouragement!
October 5, 2008 at 11:44 PM

Anonymous said…
Maybe you can push off Bun's arrival date until the 19th and we can share a birthday! Ha! Enjoy the week, your sleep, and the ability to focus on yourself for a few more days... Keep us update.

Sara Gorman said…
Hey - if Bun wants to hole up in there for an extra couple of days, I'm all for it. (Although I may change my tune come the 17th or 18th!)