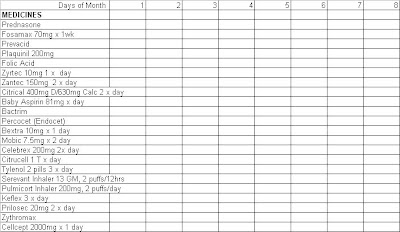 As mentioned in a previous post, here's an example of my handy-dandy Chronic Control spreadsheet. Across the top, you'll see the days of the month (1,2, 3... 29, 30, 31), and down the side is a list of my medications. Every once in awhile I add a line item for an antibiotic or an additional medication, but I've found this to be a fairly comprehensive list month to month.
When I was sick, I kept this chart religiously. Now that I'm on so few medications and my symptoms are so few and far between, I rarely use it. However, my chart was a real life-saver during my worst bouts of Lupus.
How I used the MEDICINE part:
Every day (usually twice a day - morning and night), I would record the medications I to

ok. Many times I'd simply put a check mark, but if I took the medicine more than once a day (or if the dosage changed frequently, like prednisone), I'd write in the dosage and the time I took the medication.
This second chart is a continuation of the same spreadsheet, this time with my symptoms listed down the side. 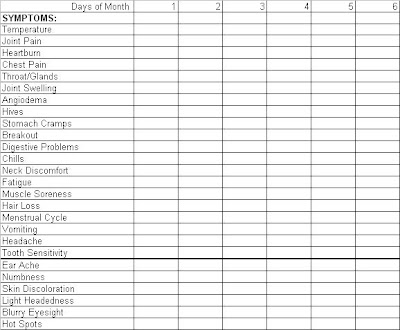 How I used the SYMPTOM part:
In addition to marking my medications, I would record the symptoms I experienced on a daily basis. If I had joint pain in the morning, I'd put "AM" in the box rather than a check. If swelling in my hands cropped up around 3pm, I'd put in the actual time. That way, I could look back and see how my symptoms developed on a daily basis. There were days when almost every box was checked...and then it was easy for me to determine that my disease was flaring. You might think it would be simple to figure out whether or not you're sick one day to the next, but when you're dealing with so many symptoms and you're sick for such a long period of time, it can be difficult to remember how you felt on any particular day. Things tend to run together after a few weeks of constant pain!
Because I kept a record of my meds and symptoms on the same chart, it was easy for me to see the correlation between the two. In fact, because I saw so many connections, I created additional line items pertaining to my lifestyle, thinking that perhaps the the hours I worked or the amount of sleep I got at night would have an effect, too. You wouldn't believe the conclusions I was then able to make between the three categories!
For example, when I went down 5 mg on my prednisone, my glands would swell. When I worked a particularly long day, I had swelling in my hands, fingers, and elbows for the majority of the following day. When I switched anti-inflammatory drugs (from one that was administered twice a day to another that was only once a day), my pain returned everyday at about 5pm (about the time I would have normally taken a second dose of the old med.) In this particular example, my doctor and I concluded that one pill wasn't enough to get me through the day pain-free, so from then on, he only prescribed those that were to be taken in two-a-day doses. It was the same amount of medication in either case, but the two-a-days were just spread out so that when my pained returned late afternoon, I had another pill to take off the edge.
I also concluded that travelling was a big culprit in my disease flares. Almost every vacation we took would be followed with a trail of check marks: fever, swelling, chills, pain, etc. Johnny and I were able to realize the connection, and slowly ratcheted back on our travel schedule. I also discovered that when we came back on say, a Saturday, and I rested all day Sunday, I was able to start work on Monday with a lot less pain than if I didn't allow a day to recover. I also saw a pattern emerge with my short weekend trips to my parent's house or to my in-law's. These quick trips took a real toll - and I learned that extending the trip by an extra day or two really gave my body time to relax and recoup, on both ends of the trip.
These spreadsheets not only enabled me to make these connections, but allowed me to exert a little bit of control in my battle with Lupus. Before I started charting, I wasn't able to clearly communicate to my doctor nor to anyone else what I was actually feeling, how long a symptom had been going on, or when it was at its worst. I couldn't remember if I'd taken a pill in the morning or not, and was unable to determine if a medication was even working. Most days, I ended up feeling confused, sick, tired, terribly frustrated and very overwhelmed. Once I started keeping the chart, though, I felt like I had a handle on my symptoms, and better knowledge of my medications. The disease wasn't any less severe, but it was better managed. And once I learned to head the "advice" my spreadsheet had to offer, I really noticed a difference in my overall health and wellness.
Labels: lifestyle medication

Anonymous said…
Sara, thanks so much for posting this! I just found out I have RA and your chart is the best thing I've seen for figuring it all out. I just made my own, only it's super-long because I have each joint region listed separately, plus Sjogren's and other symptoms! I think that this will really help me make good choices about lifestyle and meds. Your blog has helped me so much to learn about what life with autoimmune disease can look like with good management. Thanks again!
September 2, 2012 at 6:30 PM

Kang Nurul Iman said…
This comment has been removed by a blog administrator.
January 11, 2016 at 7:57 PM