I don't think I've mentioned that my doctor recently closed his private practice after 107 years (kidding), and joined a Rheumatology group practice. Having been with him for more than 20 years, there was no question that I would make the move with him. And what's not to love? In-house lab! On site Vaccines! Back up doctors on call!

The only item I failed to look into was the insurance situation. The new practice accepts my insurance, but from the first bill I received, you'd think not. It was for over $600 for the one visit! Upon receiving it, I rolled my eyes, then rolled up my sleeves and called the office. I wasn't ready for a fight, but I was ready to state my case. As I say in the chapter titled "Listen Up, Doc" in my book, "Despite Lupus", I just planned on being assertive: 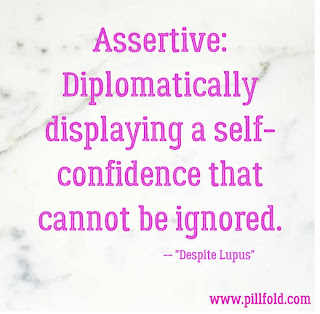 I called the business office of the new practice, and the gentleman could NOT have been more helpful. I was cordial, certainly (the whole honey vs. vinegar thing), but he was equally patient and kind. Of course, I also liked what he had to say. :) He told me to just throw that bill out and disregard it, because it was an issue on their end. In layman's terms - there were a few more steps to get my doctor approved and up and running under the new practice terms, and that the insurance simply wasn't recognizing the claim yet. He said just toss it, and another would come in the mail in due time. How lovely!
I since had a second appointment with my doctor at the new practice - still no bill.
But this week, it came.
And while it's not as bad as the first bill...it's still hefty. Like, $400 for the first visit, and $178 for the second. A few things are at play here - a new practice, lab work incorporated into the doctor's bill, a flu vaccine, a ton of blood work from the first visit, because I was a "new" patient, plus a high deductible on my part. But I called again, hoping there was some wiggle room.  Unfortunately, not. But I talked to the same gentleman, who was even kinder and more helpful than the first time. He took so much time explaining the charges, discussing what we could do, and how the bills would look in the future. We settled on a 6-month payment plan - because, hey, why not! - and I am confident that my bills will be closer to $150-175 in the future, which is about what I paid all-in when my doc was on his own. Plus it's a one stop shop with the labs. Those of you who get "stuck" frequently understand just how convenient that is!
So while I was hoping for a miracle, I did get a kind person on the other end of the phone, time in the form of a payment plan, a couple hundred dollars less than the very first bill, and peace of mind moving forward. Now I have to do my part to stay healthy so that those visits are just "check in" visits. Nap often. Low stress. Eat well. Exercise daily. No crazy late nights, herculean volunteer efforts, or overzealous business projects. I'm going to keep it slow and steady, and we'll be good!
Labels: blood work doctor insurance labs