Who needs a double stroller? 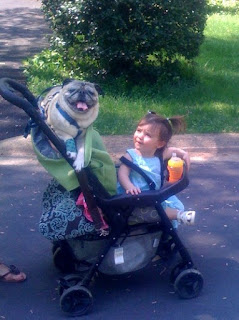 So Deirdre, Dar and I went out for a walk the other day, and
while Darwin is normally a cracker-jack walker, he must have put one paw in front of the other one too many times...because he ended up pooping out on us mid-way through our walk. I guess it was a little warm, and the hills we were doing must have been a little much for him, because after walking about 10 minutes, he just said, "That's it. I quit", and sat down in the grass along the side of the road, refusing to go one more inch. I tried to encourage him, and had even brought water for him along the way, but he wouldn't have it. He was finished walking, and that was that.

So what could I do? We were practically at the furthest point away from our destination, and Deirdre wasn't about to give up her comfy seat in the front. So - we made a single stroller into a "Double" stroller, and Dar got plopped right on top, where he was quite content for the rest of the walk. We looked pretty silly - my sister and her son giggling at us the whole time (thanks to Katie for the picture) - but Dar was sending me a very clear message as he was lying belly up in the grass, and that was that he needed to stop. The walk, the heat, the sun - had all been too much.

So I think the baton has been passed. Darwin has officially taken Henry's place in teaching me to how to acknowledge my own boundaries. Henry the pug must have been beaming in heaven - so proud of his pug brother for knowing his limitations and acting upon them. I'll look forward to the chance to put Dar's wisdom into practice (although he doesn't look particularly wise and all-knowing in this picture, does he?), and I'll be sure to listen to my body the next time I'm pushing it and respond accordingly. I'm hoping that flailing myself along the side of the road, belly up, rolling around in the cool grass will not be necessary - but I'll do what I need to to make sure I don't overdo it.

Rest assured, Darwin the pug is NOT guilty of overdoing it.
Labels: baby lifestyle pugs
Reactions:

Eila said…
That's HILARIOUS! We definately should think like an animal and just do what our body tells us to do and not put any pressure on ourselves!!
April 19, 2010 at 8:22 AM

Sara Gorman said…
Pugs are the greatest!! And they really do work well for those of us who don't need to feel guilty about taking it easy. Darwin is the FIRST one in bed for our afternoon nap...while I'm putting Deirdre to bed, he scurries down the hall, hops in bed and waits for me to follow suit. What better welcoming committee do you need?