I can't believe I've been a mom for 6 weeks! It's amazing how much Deirdre changes from week to week. Still the cutest girl on the block, though, no doubt about it!

Now that we're knee-deep into parenthood, I've realized I had some misconceptions about life with a little one, all of which caused me unnecessary stress and anxiety during my pregnancy. I was actually pretty calm (and fairly realistic) about what would happen postpartum (h 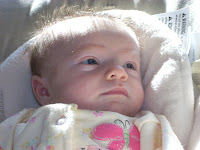 ence the reason I hired a babysitter 5 days a week), but other people (and things I read) had me scared that life with a newborn would be so hard (especially with Lupus) that I would really struggle. While I have made some major adjustments in how I spend my time now that litte Dee is around, I'm pretty darn happy about the way things are turning out. If you had this adorable face to wake up to each morning, wouldn't you be pretty content, too?
So here are three things I assumed would happen, but haven't:
1) My first misconception was that I would be SO sleep deprived, I wouldn't be able to handle it. Pre-Dee, I was getting 10 hours of sleep at night, plus an hour and a half during the day. Even though she's a great sleeper, I'm still averaging only about 5-6 straight hours at night. I also get a couple of hours in the morning (thanks to Johnny who does everything he can to help out, given the constraint that I'm the keeper of the food supply), and then another 2 hours in the afternoon (thanks to our fabulous babysitter, Leticia.) I know cumulatively, I'm getting about the same amount of sleep, but I assumed my body wouldn't adjust well to getting my rest in chunks. Goes to show what I'm capable of when I'm working from a good, healthy base.
Note to all parents following along: I KNOW I have a great sleeper on my hands, and that I'm getting more sleep than you probably did during an entire week of your newborn's life, but I've learned that fatigue can be a real killer for me and my Lupus. My health depends on the fact that I avoid it at all costs. Don't hate me because I'm well-rested!
2) My second misconception was that the learning curve on parenthood would be an insurmountable one. I'm certainly not insinuating that we've got the whole parenti

ng thing figured out, or that it hasn't been trying. What I didn't expect was that our instincts would kick in from day 1, and that feeding, changing, rocking and loving a baby doesn't take brain power...just a little patience. Deirdre has been particularly patient with her parents and big brothers - all of whom had to adjust to her arrival, some more than others. ---->>>>
3) My third misconception was that a flare was inevitable, and that I wouldn't be able to do anything to avoid it. I don't want to get ahead of myself, but if you read Monday's post, you know how quick I've been to alert my doctors to any and all changes in my health. I think that's been a key ingredient to my well-being. I've stayed super-attuned to my body, asked for help when I needed it, and utilized the heck out of my doctors. A prescription for success, I'd say...who knew taking care of yourself could be so simple?
Labels: baby lifestyle

Anonymous said…
Glad to hear your getting rest and things are going so well.

My lupus never flared with my first child :) but did with my second. :(

Anonymous said…
Great news and keep up the good work with the self-care. It's nice when we are forced to do it and then learn how much we actually enjoy it.

A friend of mine with kidney involvement took about three months before trouble showed up, but, knowing her, she pushed herself too hard.

morello said…
hello Sara, just stopping by at your blog. Well, let me say you, congratulation, for become a great mother.
April 27, 2010 at 8:25 AM