Chronic Illness - It must run in the Family

Based upon my portrayal of Henry the Pug in previous posts, one might think that he's just one big, fat trouble-maker (which he is), but it's time to give that guy a little credit. 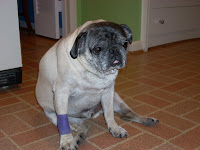 Just 3 short weeks ago, Mr. Hendopolus was diagnosed with diabetes. He's been a real trooper so far, and we've seen a huge improvement in his energy level and overall disposition since we started treatment.
He was pretty withdrawn and lethargic there for awhile, bringing his mom (and dad) to tears on several occasions. We were still on the emotional rollercoaster from bringing one little baby into this world when another of our "babies" started to poop out on us. He was one sick little guy!

Of course, there isn't anything we wouldn't do for Henry - and so we're doing everything we can to get that guy back on track. He's doing his part, too - bravely taking his insulin shots twice a day and reluctantly switching to diabetic doggy food. Adjusting to life with a chronic illness is never easy - and it usually isn't very fun. Noting the changes Henry has had to make to accommodate for his new life with diabetes reminds me of those alterations I've made in my life with Lupus. They're really quite similar - although no one ever followed me around with a urine stick to check my pee pee for glucose. (Although the 24-hour urine test to track protein levels is no picnic!)

See if some of the changes Henry's had to contend with sound familiar:
1) Frequent visits to the doctor - For a guy that hates going to the vet for even a nail trim, Henry is learning to adjust to his weekly visits. Until we get his blood sugar and insulin levels regulated, he'll be spending at least one day a week at the vet while they perform what's called a glucose curve. I'm proud of him, though - he's getting less reluctant to go each week, and you should see the way he struts around when we come to pick him up. He practically high-fives the vet technicians as he trots out the door.

2) Overwhelming number of prescriptions - In addition to the two shots of insulin a day, he's been on an antihistamine, an antibiotic, and prescription dog food since his diagnosis. He also gets eye medication twice a day for his "chronic dry eye", which flared up due to the diabetes. He never complains, though - and takes his shots like a real champ - no flinching at all. He's great about his pills, too, but I chalk that up to the peanut butter we dip them in before administering. We figure it's the least we can do.

3) Sleep disruption - Because the shots have to be given 12 hours apart, Henry can no longer lounge in bed until late morning (or early afternoon as he's been known to do.) Now, he has to be up bright and early every morning, so that we can fit in the shots twice a day. I know how he feels, as I recall having to revise my sleep schedule for many a medication. Sometimes it was accommodating drugs like Fosomax or Actonel, where you have to take the medication at least an hour before you eat, and have to remain upright for at least 30 minutes after you take it (i.e. you can't go back to sleep). Other times it was for Prednisone or an anti-inflammatory, where I'd set my alarm 45 minutes before I had to get up in order to take the meds and allow them to start working before attempting to move my pained-stricken body out of bed. It's an inconvenience no matter how you look at it.
In addition, because Hen's body chemistry is still a little "off", he drinks a ton of water throughout the day (and the night), which makes him prone to having accidents. He was getting up three times a night to drink what seemed to be a gallon of water, and then we'd have to carry that lethargic little guy downstairs (three times a night) so that he could go to the bathroom. The times we skipped the "potty outside" step, I ended up washing all of the bedding the next morning - a task I only had to perform twice before we decided something had to change. Thus, we've moved both pugs out of our bed at night - a move we probably should have done months ago (if not years) - so that they now sleep in the kitchen where linoleum is the flooring of choice and the door to the outside is just steps (rather than a flight of stairs) away. The first night was a tough one - Mr. Henry took the opportunity to perfect his howl and we still had to let him out during the night, but every night since then has improved. Both boys are sleeping soundly through the night and they barely move from their comfy doggie bed when we come to greet them in the morning. Guess they're enjoying the extra elbow room as much as we are.
3) Sacrifices in diet - As mentioned, Hendo is now on high-fiber, low carb diabetic prescription dog food - a big change for the gourmand in the family. He lost almost three pounds the first week he was on it - but he's slowly warming up to it. I remember making changes to my diet in an effort to improve Lupus - eating less dairy, cutting out nightshade vegetables, eliminating those foods for which I had developed an allergy - and it was a big pain. I felt ripped off - like I needed one more thing to adjust in my life. I'm sure Hendo feels the same way.
4) All-around lifestyle changes - In addition to the changes above, Hen is also struggling with the nerves in his back legs, his eyesight, and the fact that his parents follow him around at least once a day with a urine stick to test glucose levels mid-day. He's getting poked and prodded like never before - and now he has to sacrifice privacy while he tinkles. And yet he continues to be his loving, wonderful self - brave and courageous on all accounts. Who knows - maybe he'll write a book about his illness. Diabetes and Me: A Pug's Plight. Anyone want an advanced copy?
Labels: lifestyle pugs