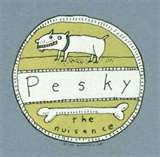 Or should I say "pesky infection?" That's right, the nursing infection I had when Deirdre was just 2 weeks old came back, and with a vengeance this time. My fever was as high as 103 degrees, and I felt fluish, run-down, and terribly chilled. While I can't blame my troubles entirely on the fact that I'm on prednisone, the drug definitely suppresses my immune system so that I have little chance of fighting off infections like this one, called mastitis.

Even though I've already started tapering off my dosage of prednisone per doctor's orders, my obstetrician (who treated me for the mastitis) encouraged me not to rush it, just for the sake of preventing infection. She said the last thing I want is joint pain on top of the mastitis, and she's right. Let's just hope this 2nd round of antibiotics does the trick. She also mentioned the idea of doing intravenous antibiotics if the oral medication doesn't work. Thankfully, one of my girlfriends in Lupus group recently shared with us her experience with IV antibiotics, so at least I was prepared for the suggestion. Had I not heard my girlfriend's story, I would have thought it was a bigger deal than it is!

Speaking of a big deal - it was a big ordeal to get an appointment with a doctor at all. My first call was to my obstetrician, primarily because she treated me for the first infection. I knew that after 6 weeks, I was no longer technically under her care, but I thought I'd try anyway. As expected, her office encouraged me to check with my regular gynecologist first, but insisted that if I wasn't able to be seen in a timely fashion, I should call back. Very accommodating, but it still meant I had another call to make. I called my gynecologist next, left a message with the triage nurse, and waited for a return call. When I heard back, they refused to see me, based upon the fact that they hadn't delivered the baby or seen me in over a year. (Well, duh...I've been a little pre-occupied with a 9-month pregnancy, thank you very much.) Their suggestion was that I go to the nearest emergency room, a trip I had no intention of making if I could help it. I begrudgingly thanked them for their time and hung up. I thought about calling my rheumatologist, but decided on my primary care physician, whose office is right around the corner from my house. This time, I left a message with the receptionist and waited for a call back from the nurse. With that return phone call, it was suggested that I call my obstetrician, since that was the doctor who treated me the first time. Ugh! Back to square one!

Thankfully, though, I hadn't become too frustrated in the process and since my OB's office had already given me the go-ahead to call back, that's what I did. My dad reminded me that the fact that I persevered in making all of these calls, even up to this point, was a sign of real progress on my part. Years ago, I might have just thrown my hands up and stopped calling. Well - not this time. I called my OB again, and they were able to see me that same day. Thus, I'm now on the antibiotic, which has already reduced my fever and given me a little more energy. I'm still feeling slightly under the weather, but I'm on the mend for sure. Here's hoping the infection is gone soon!
Labels: doctor medication