What I did on my summer vacation

The girls and I were lucky enough to spend a week at Grandma and Grandpa's house in Indiana earlier this month - and we had a blast! We went fishing and swimming in the lake where I grew up fishing and swimming, with Papa teaching the girls the correct way to thread a bee moth (or wax worm) onto the hook...something every city girl three and under needs to know. 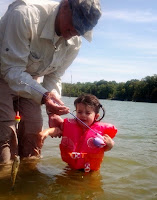 We also visited the Exotic Feline Rescue Center, less than an hour from my hometown, which my family and I never knew existed until this month. It was incredible! You can see how close we were to the big cats - I still can't believe we were within fingertips of these enormous animals. The one in the picture directly below weighs more than 650 pounds - definitely more than Deirdre and I combined. (Perhaps that's why she's flinching a bit at being in such close proximity!) 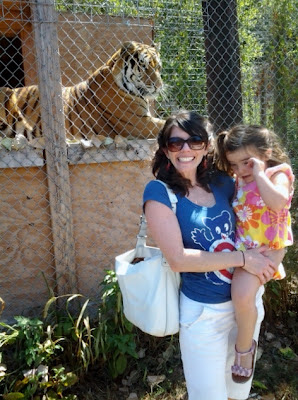 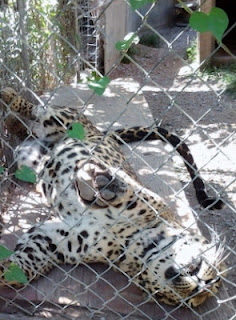 The guy in the next picture is Rodney, who was a real sweet heart. When I told him I wanted to scritch his tummy, he literally rolled over like this. Cute, huh? 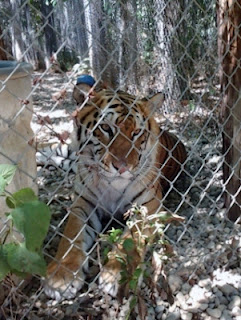 And this last picture is my gal Zoe, the one who stole my heart. She will, ahem, be receiving a Gorman Family sponsorship this fall.  Seriously, she will.

Of course, we weren't fooled by how lovable these cats appeared. We saw over 100 big cats in the 30-45 minute walking tour we took, and it became very clear that these cats were not to be messed with.

Without a doubt, the girls had a great week, and I did, too. Of course, the most important thing I did on vacation...was rest. My mom and dad went to great lengths to make sure I got my 2 hour nap each afternoon. There were a couple of days when we pushed our nap time a little later than normal - and I was quickly reminded of how detrimental that can be. You know how it goes - you're on vacation, you're doing fun things, you're going fun places - you just lose track of time. But letting an extra 30 or 40 minutes of fatigue creep in really wasn't worth it. Thankfully, I recovered after the requisite nap, but I just don't like getting overtired. It's interesting - while the girls seem to catch a second wind, I just dwindle deeper and deeper into exhaustion-ville. Thankfully, it's a place of which I'm not a permanent resident!

Learning from my mistakes (which is the most important part of living with lupus), I made sure that we ratcheted our naps back to the standard 2pm. And a good thing, too. On one of the last days, my mom had an emergency doctor's appointment (although she's fine now...thank you for your concern), and my parents were gone for an entire afternoon. But the Gorman girls rallied, and Deirdre and Bernadette watched movies and/or slept for over two hours, respectively. I had one of the best naps of the week - but I'm not fooling myself into thinking that I no longer need a babysitter. It would be easy to make such a conclusion - but I'm not a new lupite on the block. Sometimes, things don't go quite so smoothly.

And although I'm sure Zoe would be a fine nanny, I think we'll stick with the standard neighbor-girl variety babysitter!