Are those my legs on the cover on my book?

I wish! Add a couple of knobby knees, some bruises from prednisone, baby aspirin, etc., and some shabby-lookin' toes...and sure, that's just what my legs look like. Hmmm...a leg model, I am not.

In fact, I came to the conclusion that I'm never going to be a hand model either. Not that I ever thought I would be. But during the short photo shoot I had to capture my author photo (found on the back cover of my book), it became 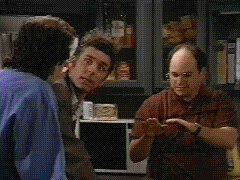 apparent that my long, bony, arthritic fingers would need some serious touch-up if they were ever to appear in print. In a couple of the shots taken where my hands were visible, they're almost a distraction. But you know? I love my hands...they're just like my late grandmother's and I think about her every time I look at them. Anyway - I don't think I'm missing anything. Look how much angst hand-modeling caused George Costanza...

While I'm a big proponent of believing that you can do anything you set your mind to...over the years, I've realized that there are a couple of other career choices that I just wasn't meant to pursue. Here's my short list - everything else was and is fair game!

1)Perfume tester - remember, I have no sense of smell. Check out an earlier post for details. Because this schnoz doesn't work, my ability to detect the fruity floral or the musky woodiness of a scent would be far less than acceptable. (In fact - I had to look up those terms since I have no idea what a perfume "smell" even is!) And don't worry, as far as I know, my anosmia (complete lack of the sense of smell) has absolutely nothing to do with lupus!

Here's an interesting tidbit I found when I was looking up the perfume smells online:

People who cannot smell suffer from some form of nasal dysfunction:

2) Professional eating contestant - I just don't have the capability of eating that quickly. In fact, it makes me a little queasy to watch other people eat so fast, too. But congrats to those who can do the whole hot-dog-bun-in-water thing. I applaud you.

Henry the pug was in an eating contest at an annual Pugarama Fest they have in our area one year. (Yes - there's actually such a thing as a Pugarama Fest, and yes, it's fabulous. 100 pugs in one place? Who wouldn't love it?)

The contestants were each lined up in front of a little bowl of water with mini sausages floating about - and who ever managed to finish the sausages first was declared the winner. (Remember, due to the pug's lack of snout, plunging that little face into a bowl of water to fish out even the most succulent of morsels is a daunting task.) Mr. Henry did not win...but his performance was stellar. Mom and Dad were so proud - he'll always be a winner in our book.

3) Long distance truck driver - I just couldn't do it. I don't even like to drive 2 hours - much less across country. Thank goodness there are others who can get the job done, as I realize 99% of the stuff I buy has been lovingly (okay, maybe just carefully) delivered by someone driving the goods a long distance. For that, I thank you.

There you have it. Sara's short list of careers she'll never pursue. That leaves quite a bit of opportunity, don't you think?
Labels: book lifestyle
Reactions:

maria said…
Man, you should see my boney digits! I'm right there with ya', sista'. I have thumbs that can alternate between hitchhiking gold and emergency places to sit...I kid you not and not just because I CAN waste my day sitting on them, either!

I remember complaining to my doc about how bad my legs were looking due to the spider vein invasions and he looked up at me when checking for water retention and asked "Do they work?"

I always remember that when I dwell on my shortcomings...he did me a favor.

Laura von Schriltz said…
I keep forgetting you can't smell - you need to read the book Perfume. I have it and will let you borrow it - it's very interesting.
May 21, 2009 at 4:46 PM

Sara Gorman said…
Maria - Glad (or sorry?) you can relate! We're doing all right, even still, aren't we?

Sara Gorman said…
Laura - I know, I know! I almost mentioned it in the post...but figured I should read it FIRST before recommending it.